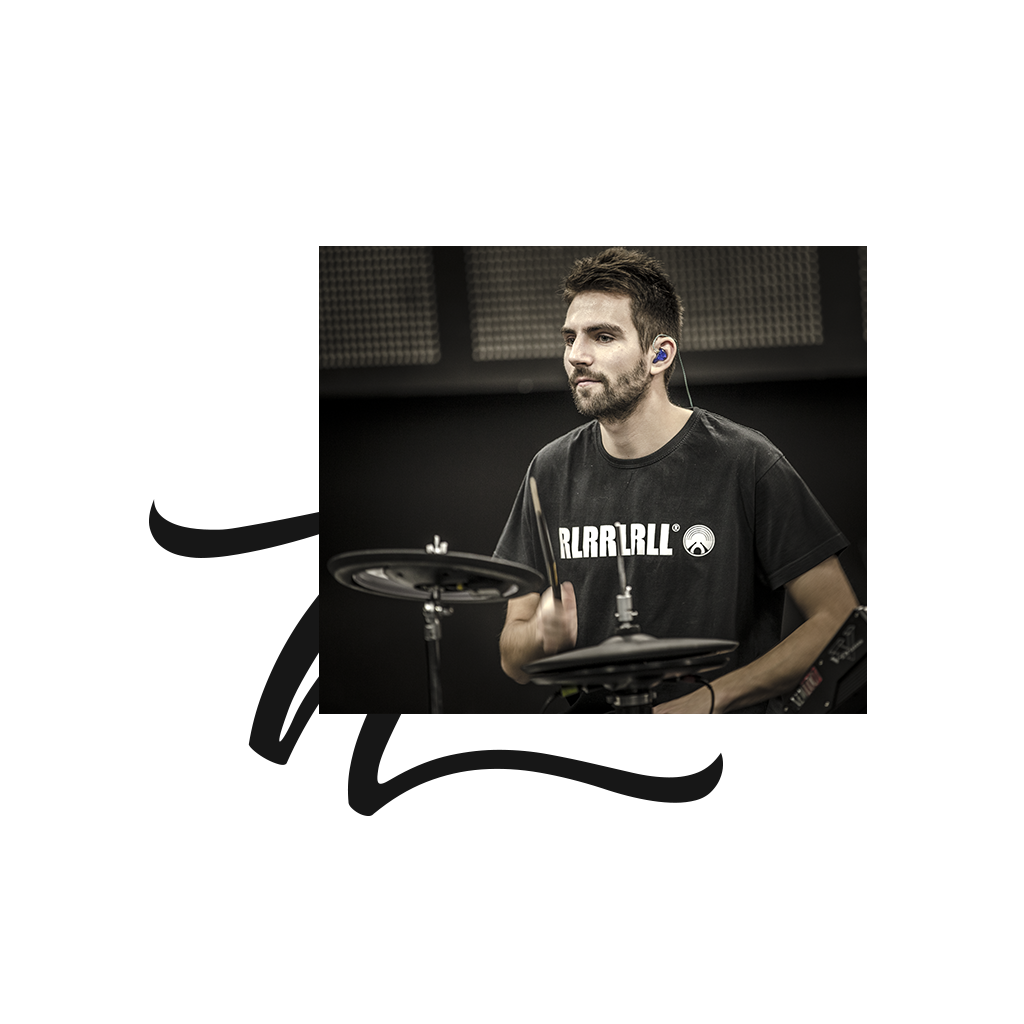 Nicolas Defer was born in Paris on September 1st, 1994. Raised in a family of music enthusiasts. Passionate about many of the greatest drummers, such as Stewart Copeland, Simon Phillips, Manu Katché, Mike Portnoy and Neil Peart, he started learning drums at age 13.
Nicolas learned the important foundations and mindset of being a professional drummer early on, taking private lessons from a jazz drum teacher. Full of motivation, he practiced his craft for hours on end. At 15, he began recording in the studio and playing live with his little brother Matt on the guitar and his father Leevan on the bass. Nicolas was so starstruck seeing the live coordination and visual aspect of some of his favorite bands live, such as Dream Theater, that he began developing his sense of live musicianship by joining bands in his area. He was, and still is, interested in many different genres of music, including funk, rock, metal and more– wanting to learn as much as possible about different music worlds. He created his own identity by combining his wide knowledge of music styles and his band experience developing his musicianship.

In early 2015, while attending Thomas Lang’s drumming camp in northern France, Nicolas decided to pursue his passion for drums and become a professional drummer. Since then, his career skyrocketed and he toured all over Europe with many popular artists and bands. In addition to performing on stage and on TV with popular french singers such as Julien Doré and Marina Kaye, international artists like Mika, Matt Simons and Anne Marie, he played in front of thousands of people at events such as the Japan Expo and the Made in Asia Convention. Nicolas now enjoys the comfort of his own home studio, in which he is able to record and edit high-quality drum tracks for artists and bands. He also gives privates lessons and produces his own acoustic-drum videos that have now been watched over 350,000 times on his YouTube channel.

Thanks to his sponsors Promark, Evans, TRX Cymbals, Earbay and Cympad, he also was invited to do drum clinics alongside some of the most famous drummers such as Aaron Spears, Brian Frasier Moore, Damien Schmitt and more.
Now working in Paris, London and Los Angeles, he’s become an international drummer.

This website uses cookies to improve your experience while you navigate through the website. Out of these, the cookies that are categorized as necessary are stored on your browser as they are essential for the working of basic functionalities of the website. We also use third-party cookies that help us analyze and understand how you use this website. These cookies will be stored in your browser only with your consent. You also have the option to opt-out of these cookies. But opting out of some of these cookies may affect your browsing experience.
Necessary Toujours activé
Necessary cookies are absolutely essential for the website to function properly. These cookies ensure basic functionalities and security features of the website, anonymously.
Functional
Functional cookies help to perform certain functionalities like sharing the content of the website on social media platforms, collect feedbacks, and other third-party features.
Performance
Performance cookies are used to understand and analyze the key performance indexes of the website which helps in delivering a better user experience for the visitors.
Analytics
Analytical cookies are used to understand how visitors interact with the website. These cookies help provide information on metrics the number of visitors, bounce rate, traffic source, etc.
Advertisement
Advertisement cookies are used to provide visitors with relevant ads and marketing campaigns. These cookies track visitors across websites and collect information to provide customized ads.
Others
Other uncategorized cookies are those that are being analyzed and have not been classified into a category as yet.
Enregistrer & appliquer
Propulsé par